The Mayoress of Sant Cugat, Mercè Conesa, attended last Tuesday, July 18, to the new equipment of the ZEM la Guinardera’s pavilion 3 that will be released at mid August coinciding with the beginning of the preseason of the first team of indoor football Sant Cugat. The clubs that will enjoy the new sports facilities are the Futbol Sala Sant Cugat, the Volleyball Sant Cugat and the School of Artistic Skating (EPA), although other sports modalities will be able to be practiced. The reception of the work of the temporary union of companies (UTE) Arcadi Pla and Calaf Constructora to the City Council is scheduled between late July and early August. The inauguration of the facility by the City Council will take place in the second half of September. 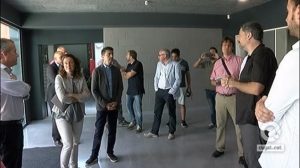