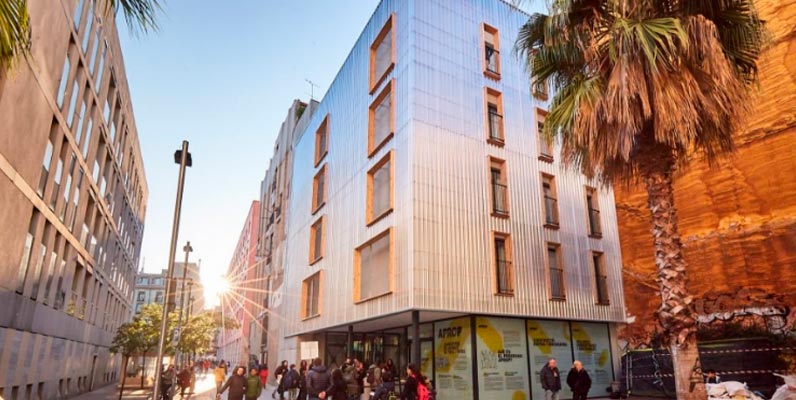 The second building of the provisional proximity housing programme (also known as APROP) will be ready in the San Martín district in just a few months’ time by Calaf Constructora, for families in emergency situations and young people, a vulnerable group in the real estate market, with a total investment of 4 million euros.

The prefabricated modular buildings made from recycled maritime freight containers will have 42 flats, 35 of them with two bedrooms, and a total capacity of 110 people. This proposal was created with the aim of offering habitable and dignified spaces in a quick and sustainable way for those groups of the population with problems to access housing, such as those affected by evictions, and to promote the feeling of belonging to the different neighbourhoods of Barcelona.

Several controversies have arisen as a result of the use of recyclable materials and the precariousness that these types of housing may present in the first instance. Even so, APROP provides a dignified solution to those neighbours who find themselves in need of leaving their homes and are looking for short-term accommodation in order to find other accommodation that fits the available price, thus maintaining an equitable territorial distribution thanks to the plots used and the optimisation of urban space.

With the support of the Barcelona Social Housing Council and Barcelona City Council, the proposal for Bolivia Street is based on a fully industrialised construction, characterised by its brevity, hygiene, a notable reduction in noise and visual pollution and therefore respect for the wellbeing of the neighbours in the area. However, it also stands out for the use of recycled and biodegradable materials, a fact that makes it possible to promote technological innovation in the sustainability sector as well as to increase the number of jobs.

The layout of the accommodation buildings consists of an open kitchen, a full bathroom and a dining room and storeroom for the two-bedroom flats. With regard to the common areas, a laundry service, workshop and leisure areas and a garden space for self-cultivation have also been included.

APROP has been well received by Barcelona’s institutions and organisations for its low CO₂ emissions, with the inclusion of solar panels, cross ventilation and access to natural light inside the homes, with a commitment to renewable energy and low energy consumption.

However, the social function of the works also plays a key role in the approval of the APROP property network. The councillor for Housing, Lucía Martín, comments that 50% of the houses are destined for families, both single-parent and not, registered in the Emergency Table and in urgent need of housing, while the other half will be occupied by young people, a quarter of the applicant public for the flats that fly the emancipation or provisional rent down price. The type of contract that these homes will have, in accordance with the Law of Urban Leases, is still under consideration.

The APROP initiative achieves the construction of quality housing in only 9 months from the beginning of the project design and offers the advantage of easy assembly and transport of materials once the project is completed. Moreover, over the next few years, some 4,000 flats with these characteristics are expected to be built throughout Barcelona (in the Gothic Quarter, Glorias and Can Batlló), and several countries such as Vancouver, Copenhagen, London and Amsterdam have fought for the possibility of including similar proposals in their urban areas.